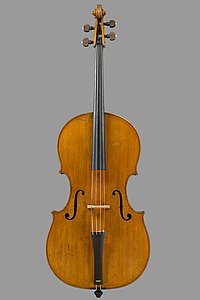 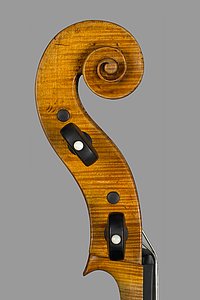 Certain doubts have been expressed as to whether Stainer even built conventional cellos. The cello from the Stainer quartet built in 1673 put an end to all such speculations.

The dendrochronological examinations proved that the belly was built from wood from the same log as a violin and a viola da gamba built in the same year. All other stylistic characteristics point clearly to Stainer.

During the 19th century the instrument was victum to numerous alterations. The contours of the back were altered considerably (upper and lower additions) and the original neck was replaced with a modern neck.

As part of the restoration to its Baroque origins only the fittings and the fingerboard were altered. The length of the vibrating portion of the strings is 68.7 cm.

The instrument is well suited to perform a wide repertoire from the early Baroque to the early Romantic periods.