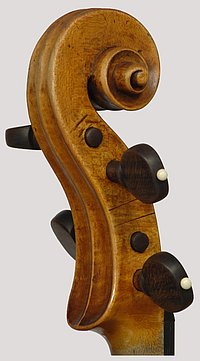 The conditions regarding the use of the Stainer quartet was so restrictive that the valuable instruments rarely were played, and with time even less. Specific changes to the instruments and a liberalization of the statutes were made in the 1990’s with the goal of renewing interest in the quartet, but without great success. Some musicians were not satisfied with the instruments because they lacked a «big tone», despite the changes made to them in the 19th century. And proponents of historical performance practices avoided them exactly because of these alterations.

Within the framework of the major Jacob Stainer Exhibition that took place at Schloss Ambras near Innsbruck in 2003, the department for historical music instruments at the Kunsthistorische Museum Vienna suggested that the two violins be restored completely to their original condition and only the fittings of the viola and cello be restored to their Baroque origins since original historical models did not exist for them. Aline Oberle, a master violin maker from Steuerberg/Kärnten (Austria) made these restorations for the Musikkollegium Winterthur in 2003 and 2004. It was also in connection with the Stainer Exhibition in 2003 that all doubts about the authenticity of our four instruments could be eradicated.

The restoration of the two Jacob Stainer violins from the year 1659 from the collection of the Musikkollegium Winterthur.

Most of the instruments of the famous violin makers from the 17th and 18th centuries underwent major alterations during the late 19th century. As concert halls grew in size and compositional styles changed it was the popular belief that instruments should be altered with regard to tone and playing techniques in order to accommodate these changes.

These two violins by Jacob Stainer also «suffered this fate».

In order to restore an instrument to its assumed original condition a certain amount of preparatory work is necessary. Most important is to find a violin from the same maker that was not «modernized» during the 19th century.

For these two «sister» instruments I found an instrument (J. Stainer 1668) at the National Music Museum of the University of South Dakota to serve as the model for the restoration.

The procedure for the restoration: the belly had to be removed first, and the neck, saddle and purfling had to be refitted. The bass bar was replaced with a shorter, lower one. The top block in which the modern neck was fitted was removed and replaced with a new one. The modern neck (fitted into the pegbox) was removed, refitted into the pegbox and mounted at a lower angle to the ribs on the top block with a nail. The fingerboard, a spruce core with an ebony veneer on the three visible sides was fitted like a wedge onto the neck and into a groove on the edge of the belly. A Baroque neck is thicker in width than a modern neck when cut to fit.

The fittings of a Baroque violin look different than those of a modern instrument. The tailpiece is made of pearwood with an ebony veneer; the holes for the strings do not have any grooves, they are fixed with gut. The plumwood pegs were turned, stained black and ornamented with bone tips, the knobs likewise plumwood. Unfortunately an original bridge from one of Stainers instruments does not exist; I chose to use a Stradivarius model for the two violins.